Why did you make these pages? 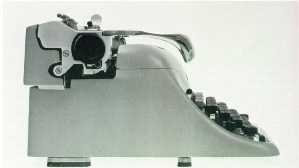 I'm a word processing person originally. When I started to work it was for a firm called Nidera Argentina (I was living in South America at the time). Typing in those days was done on a machine called a typewriter (remember typewriters?).
If you made a mistake, you either started over, or tried to erase the offending letter with a rubber and then reposition everything to the exact same spot to retype the correct letter (Typex? Wasn't invented yet). It got worse when you were typing several copies of a document at the same time, using carbon paper, which got inserted between the copies.

One thing about typing on a mechanical typewriter with no correction facilities whatsoever is that you learn to type. You really learn how to type. After all, if you get it wrong, you have to start all over again!

Nidera also had a telex-room, and that was great. You could actually indulge in realtime chat with other telex operators around the world. That was when I started signing messages as "J." More than thirty years ago! Online chat avant la lettre. This was frowned upon by management, of course, but it happened and it was fun. This is probably why I am like messenger programs - it's just like being back in the telex-room. People worry about the deterioration of language on MSN, but that was going on back in the seventies in the telex-room as well: where do you think acronyms like ASAP and ETA come from? 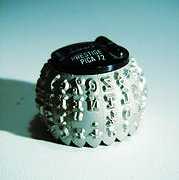 And then, slowly but surely, automation came to the typing pools. It started with those lovely IBM typewriters that had correction tape. You could correct a typo with two keystrokes. Amazing!

This led to word processing. There were typewriters with built-in memory (a whole page, wow!), and IBM's System 6, a hugh dedicated word processing system with a built-in printer, that used floppy disks nine inches in diameter. I must have typed hundreds of "notariële akten" (long dutch legal documents) on System 6.

Nearing the end of the seventies, the first home computers with the CP/M operating system started to appear (in my world, anyway) and with them came Word Star. Amazing program!! You could make it do practically anything if you dared (and if you could remember the commands!) And you could get a spellchecker - in english, which wasn't much help in Holland, but still.
It went on to DOS computers, and then WordPerfect, typesetting, doing page layout in Ventura Publisher, graphics.

Still: what I've been doing all these years is produce written information, presented in format that's easy to read (in the first place) and pleasing to look at (in the second place). Obviously, the time had come to do that on screen, so sometime in 2004 I finally decided I ought to learn how to make a web page.

How did you make these pages?

It was starting to get frustrating: my daughter simply got together with a friend who happened to have Dreamweaver, and they made a homepage in just one evening.
Sure, I could have used Dreamweaver too, or Frontpage or something like it, but a friend pointed out that WYSIWYG editors were for wimps, one should build fabulous pages with lovely clean mark-up using nothing but Notepad. So I started researching. And reading.

Then I found it:

THIS was the way it was supposed to work! You simply (?) input your text and your graphics, adding markers for a definition file to read as you go along (exactly the same wayI did it with input for typesetters all those years ago), and you make a separate file with definitions of what you want your markers to mean in terms of shape, size and placement. And you have practically total, the-sky's-the-limit freedom - as long as you stick to the grammar.

Well, if I was going to do it, I wanted to do it right. And I found there's an overwhelming amount of information out there, there are so many people who take the time to generously share their knowledge and experience. I would like to take this opportunity to express my appreciation to all of them, and thank some of them especially: To understand the basics of mark-up, I did the great (and great fun) tutorials on Iron Spider's website. As he says on his website: To err is human. To really foul things up requires a computer. I found out all about that when I started trying to position stuff using CSS.
Thanks also to Blue Robot and his Layout Reservoir (his CSS for a two column layout was the basis for the first version of my homepage, though I messed about with it so much that I'm not sure he'd still want his name in the CSS file), CSS for the Unglued, Position is Everything, especially their layout demo Perched upon a Lily Pad . For the color scheme I used the Color Palette Creator at Slayer Office. What a lovely tool! You can play with it for ages!

Update 2008: Sometime in 2007 someone pointed out that my page looked horrible in Firefox. Bother! Since I have to use IE at work, I also used it at home, and I decided to ignore the issue. Almost all the visitors (all seven of 'm) to this page use IE anyway, and I'm doing this for fun, after all. But then in 2008 I got my lovely little Asus EEE mini-laptop, which uses Linux. Hence: Firefox. And a few months later I switched to using Google's Chrome browser (which also botched my layout). That did it. I redid the layout, and rewrote the CSS from scratch. I think it looks the way it's supposed to in most browsers now.